A Living Celebration of Bhakti

The Bhutabhrteshwarnath Mandir is the most beautiful Hindu temple in all of Europe. The temple is a living celebration of Bhakti: heartfelt devotion to God. The name means ‘the Lord who nourishes the whole universe’ and refers to the aspect of Lord Narasimha (the half-man/half-lion Divine manifestation) that creates balance and gives protection to all.

Now the largest Narasimha temple in all of Europe, our prayer services are morning and evening, every day. Attending these beautiful ceremonies, you'll get to hear great music, sing, chant, enjoy the sight of the pujas and aratis being performed, and view over 10 special deities (one that is unique in the entire world).

You'll also enjoy over 100 original wall paintings and sculpted reliefs created by artists from all over the world. This extraordinary art is designed to nourish your heart with the Leelas of Krishna, the stories of the Lord and His devotees from the Shreemad Bhagavatam, and the lives of the saints -- all in a way you'll never forget.

Take a look inside the mandir

Join us every day by livestream for Morning Prayers and Evening Arati, direct from the Sri Bhutabhrteshwarnath Mandir. Central European Time:

Join the SPN Daily Temple Satsangs Channel for access to daily audio recordings of Shrimad Bhagavatam and Bhagavad Gita satsangs given in the Bhutabhrteshwarnath Mandir.

This is a great way to deepen your understanding of these profound scriptures and our spiritual path through the sharing of personal experiences given by a wide variety of speakers.

Serve those
who serve humanity

Now you can connect to the Divine through The Serve A Deity Program at Shree Peetha Nilaya. With this new program, you can actively assist the pujaris who serve the deities every day by sponsoring the deities. For every puja conducted for the deity, the blessing goes to the sponsors. In this way, you are helping the deity to be served while gaining benefits for yourself as well.

The Deities of the Mandir

Hinduism is based in one God, one Truth, one Reality, that is expressed in many different ways. That's why the Hindu tradition has so many deities: the variety of deities reflects all the different qualities of this one supreme Reality, but manifested in different shapes and forms.

You can choose the form that you are most attracted to, and through that form, develop a heartfelt relationship with God. Learn more and deepen your connection to each deity by joining its Telegram Fan Group. Click the photo for the join link.

This temple is devoted to the Divine manifestation of Maha-Vishnu known as Narasimha. Although He might look fierce, Narasimha is actually very caring for His devotees. He comes to restore balance and to destroy what is called 'spiritual pride'.

Narasimha has several aspects, and the main deity of the temple is known as Bhutabhrteshwarnath, which means ‘the Lord who nourishes the whole universe’.

If you look closely on the top of His shrine, you will see nine small figures. That arrangement is quite unique: there is no other temple that features these particular nine forms of Narasimha under one roof.

Radha and Krishna represent the loving relationship between the devotee and God, which is the essence of our path, 'Bhakti Marga', the path of devotion. The presence of this Divine Couple reminds us all to deepen and develop our own unique relationship with the Divine.

The Divine couple's name is Kripanidhe which means 'the one whose heart is full of mercy and bestows Divine Grace'.

This Krishna deity is very special in that He has four arms, not just two, and represents the cosmic Form of the Lord. Two hands hold His flute, while another hand holds the Sudarshana Chakra. The fourth hand shows the grace-bestowing mudra to remind us that the Lord is continuously bestowing His blessings upon us.

Shree Peetha Nilaya means the 'abode of Maha-Lakshmi' and Sripiteshwari is the name of the Divine Mother who is in residence in the centre.

Maha-Lakshmi is the Lord's ever-present consort, the Cosmic Mother who cares for everyone. She is like the intercessor: in the same way that in the Christian tradition people may pray to Mother Mary, so, in the Hindu tradition, we have Maha-Lakshmi that cares for us.

Most often known for prosperity and financial wealth, Maha-Lakshmi is first and foremost the provider of spiritual wealth. The Ashram Shree Peetha Nilaya is Her home, and everyone who comes here is blessed by Her grace to progress on the spiritual path.

Sri Ranganatha is a manifestation of the Supreme Lord, Narayana, in His Maha-Vishnu aspect. He is the eternal consort of Maha-Lakshmi and thus His name is Sripiteshwar. He reclines on His constant companion, Adishesh, who floats on the Milky Ocean.

Although in this pose it may look like He is drifting off to sleep, He is not; Maha-Vishnu is enjoying His creation. His Divine Will is the starting point for creation, and He lives inside of us all, deep within our spiritual hearts.

Mahavatar Babaji is the immortal yogi who has given Kriya Yoga to the world, and Sri Ramanuja Acharya is the one responsible for consolidating and refining the philosophy and practices of the Sri Sampradaya.

Their placement on the altar reminds us of the importance of the guru in our tradition, and that no spiritual goal can be achieved on our own; the grace of the Master is always needed.

Lord Rama, an avatar of Lord Narayana, was a great king and the embodiment of righteousness. He incarnated to restore dharma and to set an example as to how one should perform one’s duty in life. He is known as Kripanidhe Sri Ramchandra Bhagavan, the lord of mercy.

This divine family, along with Lord Hanuman, Lord Rama’s greatest bhakta, reflects the beauty of sacrifices made out of love for the good of all.

Radha stands for the hidden longing of the soul to connect with God. This deity of Radha-Durga, however, is totally unique; you will not find this form anywhere else in the world.

She represents material creation – Maha-maya. Paramahamsa Vishwananda explains that while Maha-maya can shroud us in illusion, She can also liberate the devotee to advance towards God; this deity is the liberating form of Maha-maya.

In the form of the Goddess Durga, with 8 arms and 8 spiritual weapons, She holds Krishna's flute as well. The flute reminds us of Her connection with Krishna: the flute is an empty vessel which symbolises the state of complete surrender to the Lord, so that He can play whatever music He desires. She holds the flute as as a reminder to surrender completely in the hands of the Lord.

Tulsi Devi is the embodiment of purity, chastity, unconditional love and devotion. She is the Divine Mother who gives ceaselessly to her children. You'll see her in two forms in the temple: as a deity and as a plant.

She assumes the form of a plant for the benefit of everyone who performs devotional service to the Lord. In fact, no offering to Maha-Vishnu is accepted by Him without a Tulsi leaf being offered as well.

Saraswati-devi is an avatar of the Divine Mother. She is so merciful. her vahana is a swan which symbolises the purity of the mind. She is holding the knowledge in Her hand to remove ignorance and to perceive the Lord everywhere.

Through her blessing, she clears the mind and grants the knowledge to understand things properly.

Saraswati-devi is known as the goddess of music, art, wisdom, knowledge and learning. She is one of the holy trinity of goddesses, Lakshmi-Saraswati-Parvati, and is the eternal consort of Lord Brahma.

Gayatri Devi is one of the primordial aspects of the Divine Mother, and all Hindu traditions worship Her. A wife of Brahma, she symbolises purity and spiritual advancement, and is considered the Mother of the four Vedas.

She also brought into being the Gayatri Mantra which is considered one of the most powerful mantras, granting purification of sins and ultimate liberation.

The Shiva Lingam is considered Shiva Himself, one of the greatest devotees of the Lord. Considered an embodiment of the Divine Consciousness, Shiva is also the energy of transformation in material creation, as well as transformation along the spiritual path.

Kamakshi is the beautiful Devi at the back of this small alcove. Known as 'the one with the enchanting eyes', she is also known as the one who has all the symbols of life's desires firmly in hand. By controlling these attachments, one can obtain liberation. She is not only a sweet reminder of that, but is also an effective helper that can carry us to that goal.

Chaitanya Mahaprabhu was considered an incarnation of Krishna and Radha in one body, so that Krishna could experience the immense Love and devotion that Radha had for Him.

Nityananda was His closest associate and, together, they spread the Sankirtan Bhakti movement, singing the Name of the Lord as the easiest means to Enlightenment.

The deity that stand outside the entrance to the temple is unique: there is a form of Narasimha on the back of the Sudarshana Chakra. Together, this is called Sudarshana-Narasimha.

On one side, Maha-sudarshana offers great protection from everything, from your mind, and from others. He holds the Sudarshana Chakra of Narayana (the disk on His finger), which is a powerful spiritual weapon. It also symbolises the wheel of time.

The other side of the deity is Yoga Narasimha. In this special form, He holds the Sudarshana Chakra of Narayana in all four of His hands, instead of the traditional weapons.

The vibration of the Maha-sudarshana Chakra is very powerful, and standing in front of this deity helps to remove all your negativity and protects you from taking on more. To gain the most benefit, walk around Him three times clockwise, chanting the Maha-sudarshana Mantra.

Before the temple inauguration, Paramahamsa Vishwananda spoke about the various deities of the Bhutabhrteshwarnath Mandir. Watch it below.

The Murals of the Mandir

The main temple room of the Bhutabhrteshwarnath Mandir is filled with remarkable paintings. These brilliantly coloured murals are everywhere: not only on every wall, but on all of the ceiling beams as well.

Each scene represents a very special story, called a Leela, and every Leela has a significant meaning. Starting with the life of Krishna, the murals also cover stories of the Lord and His devotees from the Shreemad Bhagavatam, as well as musician saints, poet saints, and our spiritual lineage of Masters.

Designed to remind you of the intimate and eternal connection you always have with God, may these images find a home in your heart and may they blossom into pure Love and devotion to the Lord, which is the ultimate essence of Bhakti.

Paramahamsa Vishwananda spoke about the meaning of the murals within the Bhutabhrteshwarnath Mandir hat have been painted by various Bhakti Marga artists. Watch it below.

From the vision to reality

With Paramahamsa Vishwananda's original vision and three years of planning, demolition, construction, artwork and finishing touches, the Bhutabhrteshwarnath Mandir has come to life.

Scenes from the Inauguration

The inauguration of the mandir was filled with music, food, worship and community. It was an extended 5-day celebration that included an extraordinary ceremony called the ‘Prana Pratishta’: a ceremony that invokes the Divine to inhabit the forms of the deities present. 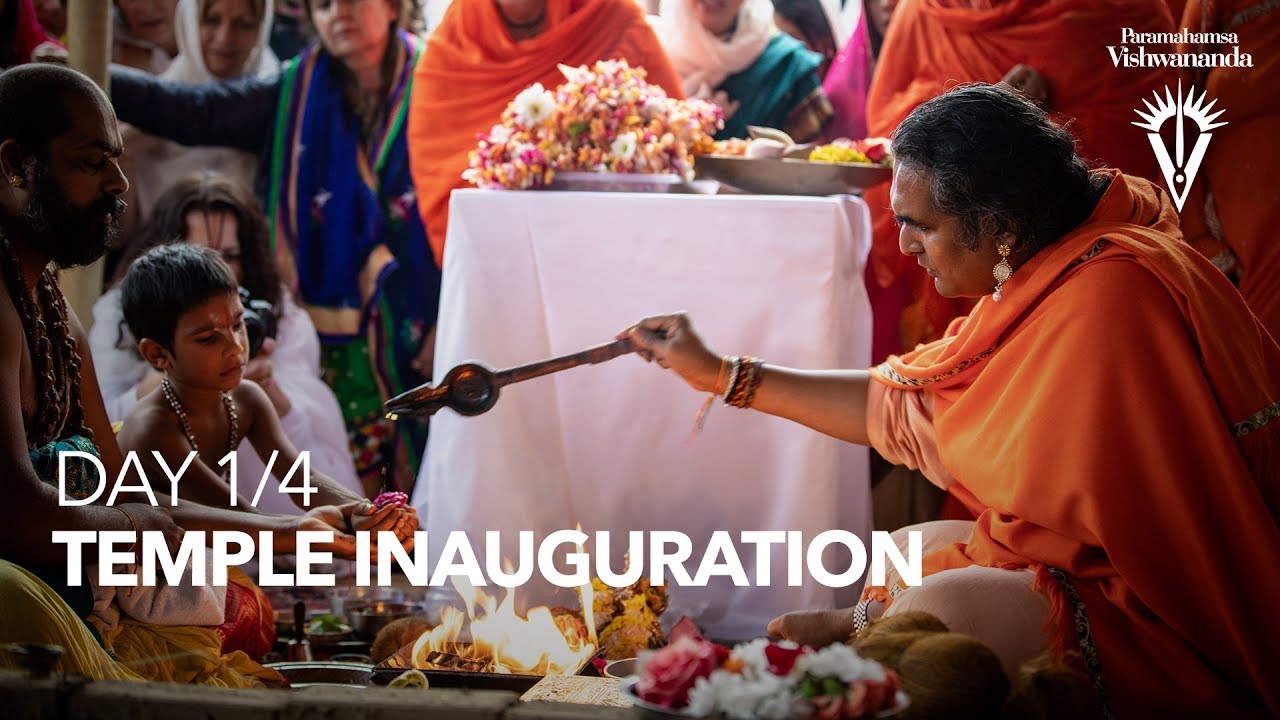 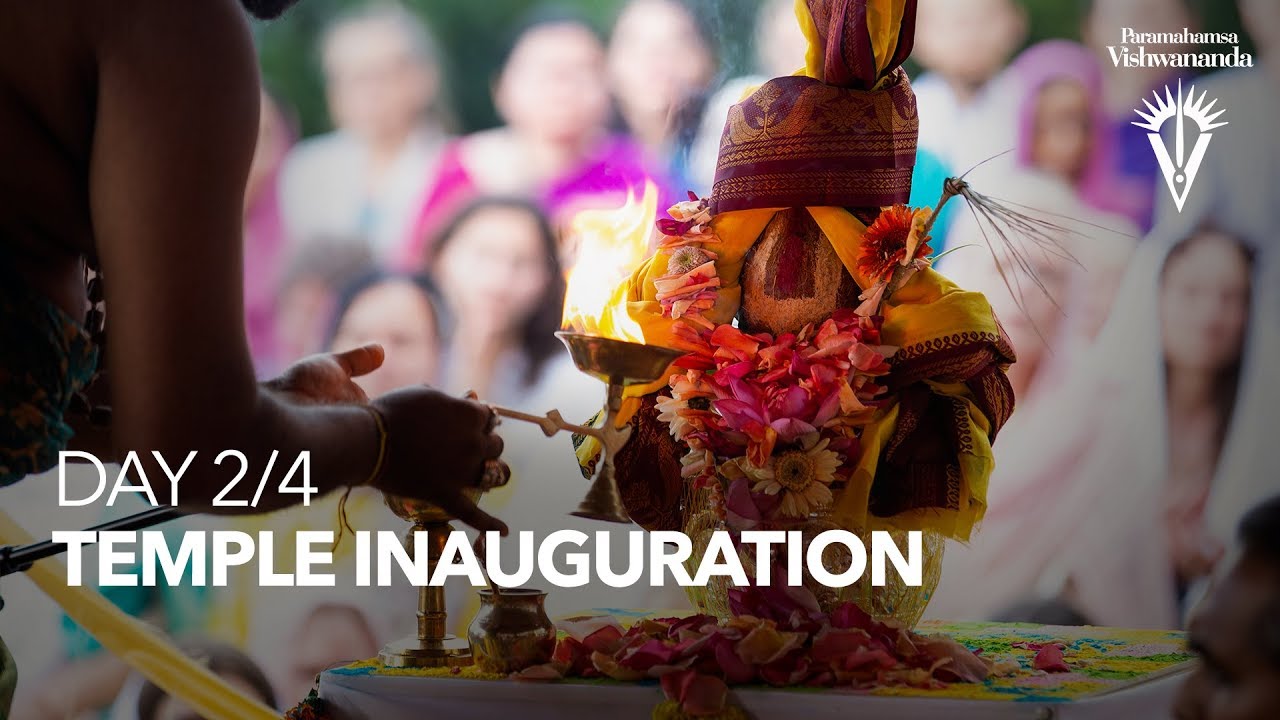 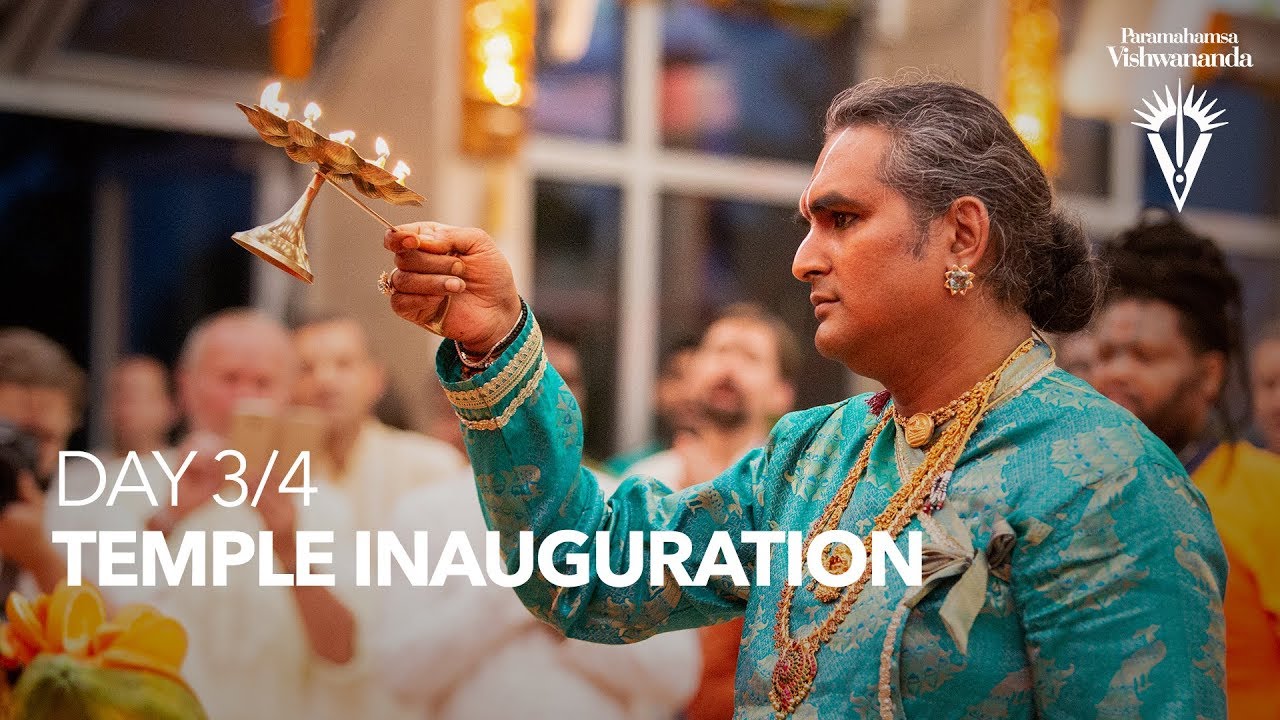 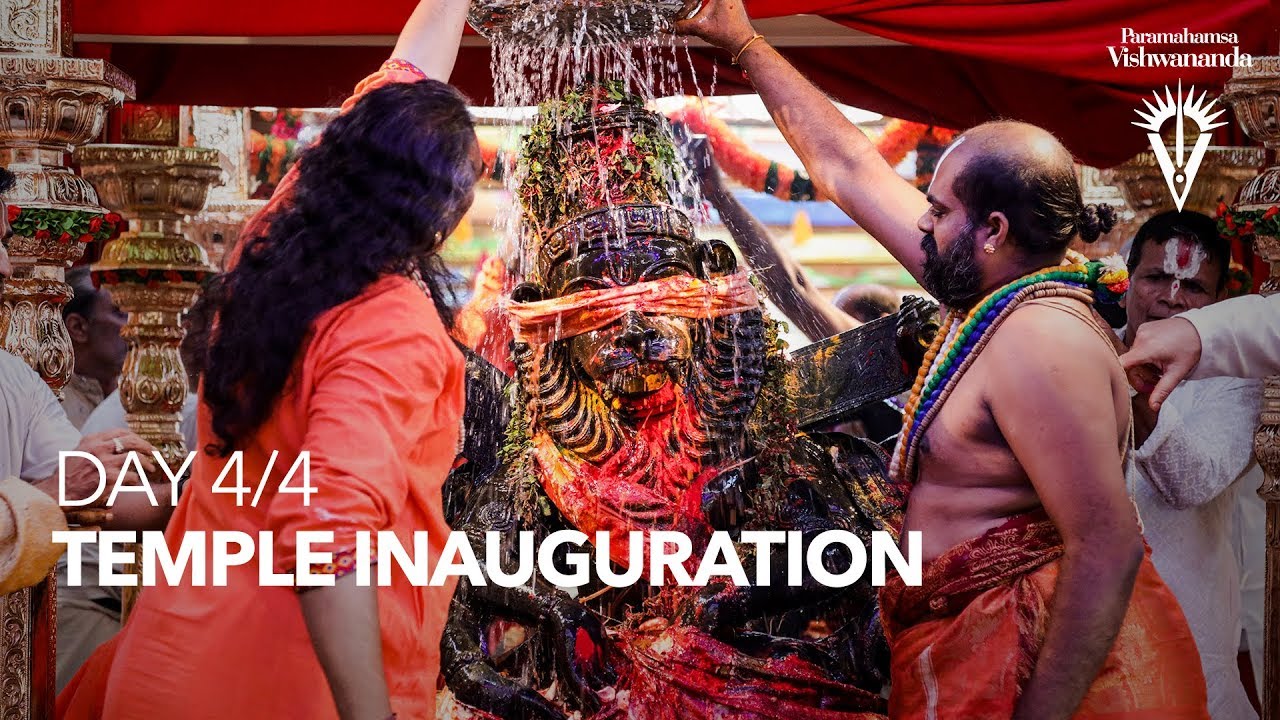 Want to experience the temple in person?